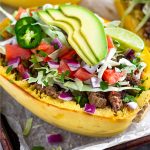 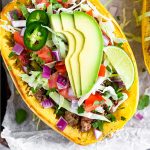 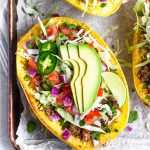 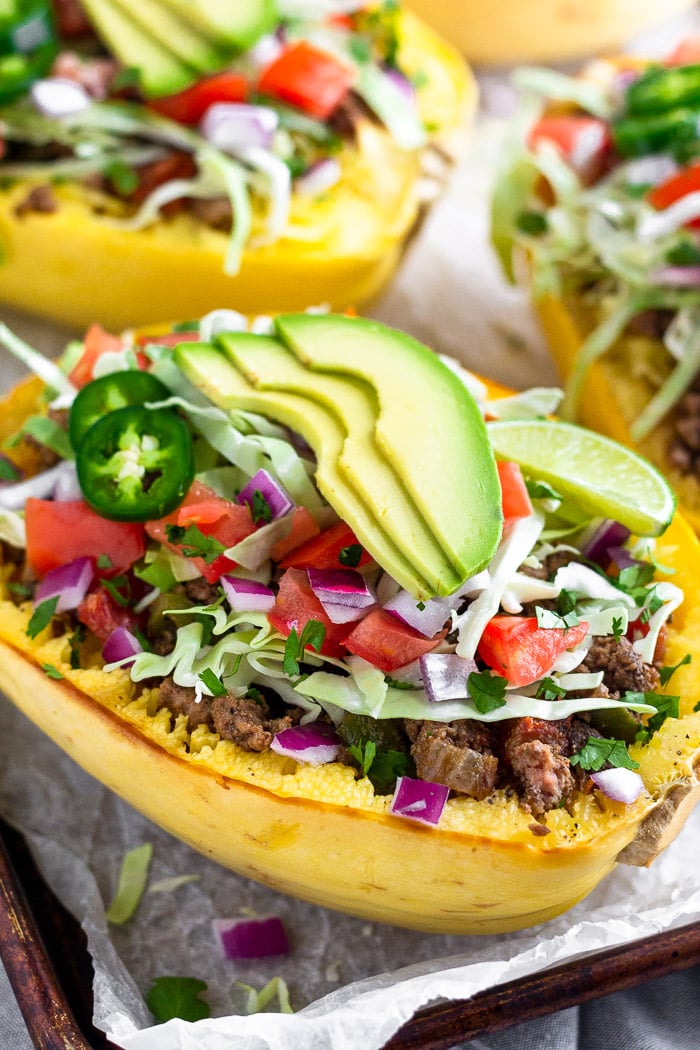 Taco Thursday!!! Just kidding, that isn’t a thing, but it totally could be. Today we are changing up your typical tacos and make taco spaghetti squash boats!

We can always eat Mexican food in our house, and with Cinco de Mayo just around the corner, I wanted to do something fun. Living in Texas, it is practically a holiday here. All the chips, guac, margs, and tacos. That really sounds like everyday though…ha! 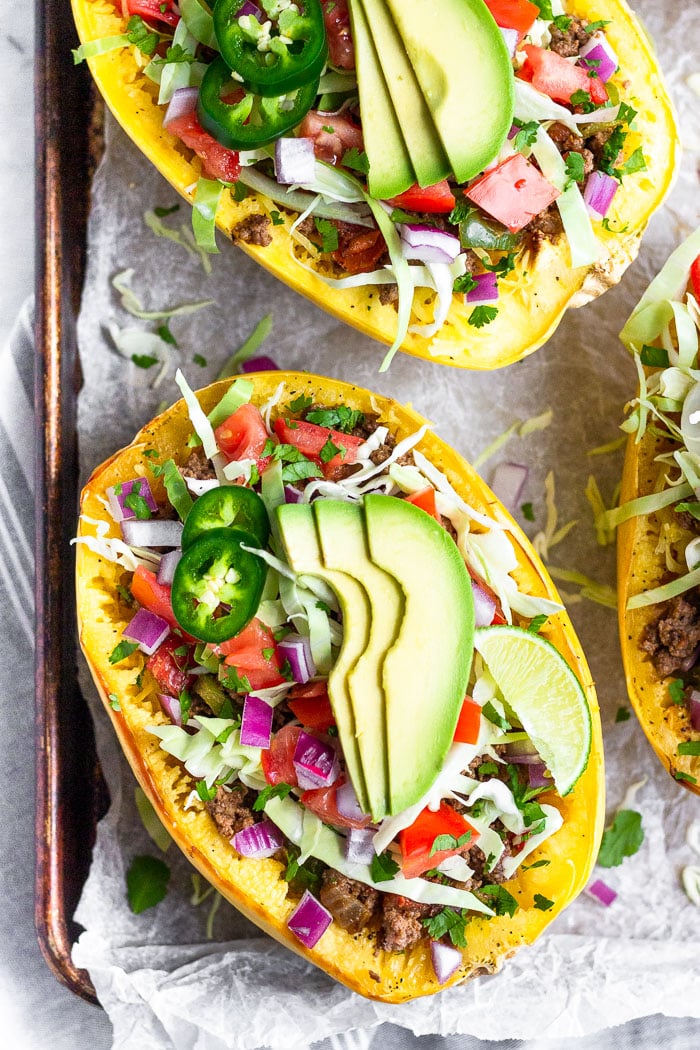 These boats take out the tortillas and use a spaghetti squash instead. I don’t have anything agains tortillas, but it’s always fun to change things up. And who doesn’t love eating out of an edible bowl!

While I wouldn’t say spaghetti squash is a nutritional powerhouse, they make a great substitute for pasta and are a lot lower in carbs. They provide a good source of folic acid, potassium, and vitamin A. You might not think of pasta and tacos, but you can stuff them with whatever you want! 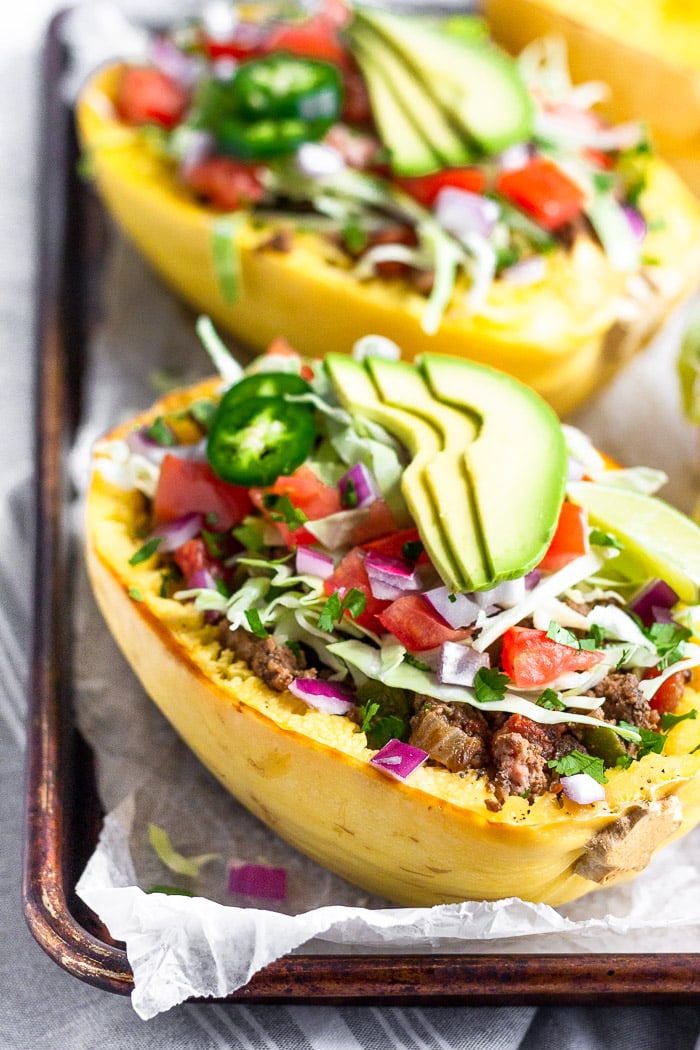 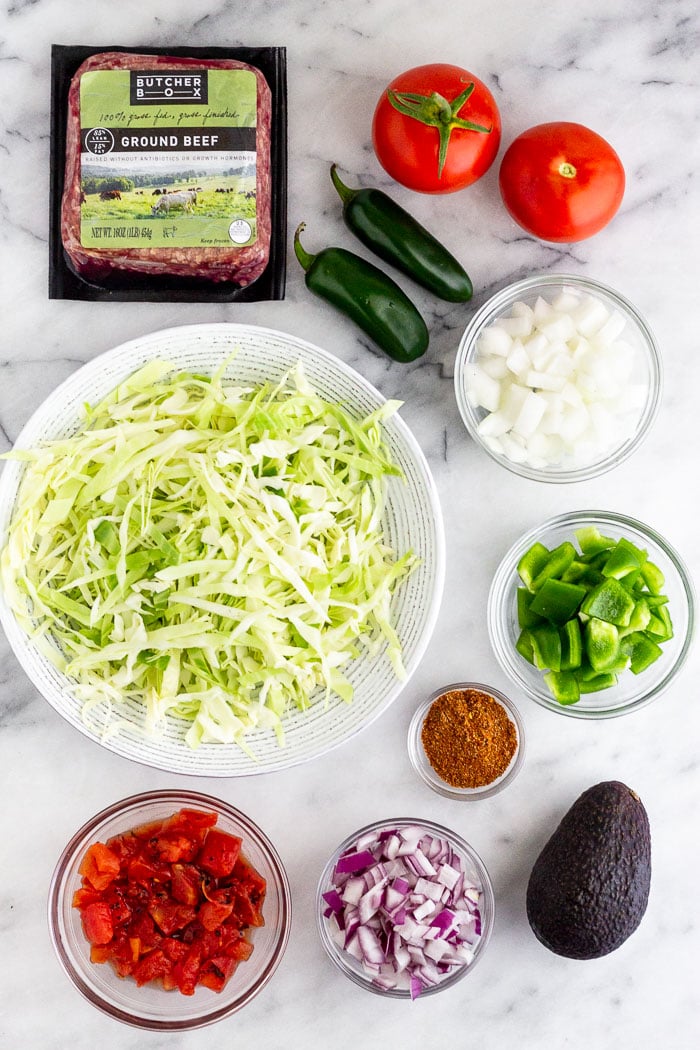 First sauté the onion in the oil until it softens up some. Then you add the pepper and let it soften as well. Add the ground beef and cook for about 3 minutes or so. Finally add the taco seasoning and canned tomatoes and cook until beef is browned and cooked through.

I decided to keep these paleo and Whole30 approved, but the addition of cheese or black beans would be amazing! The more toppings the merrier!! 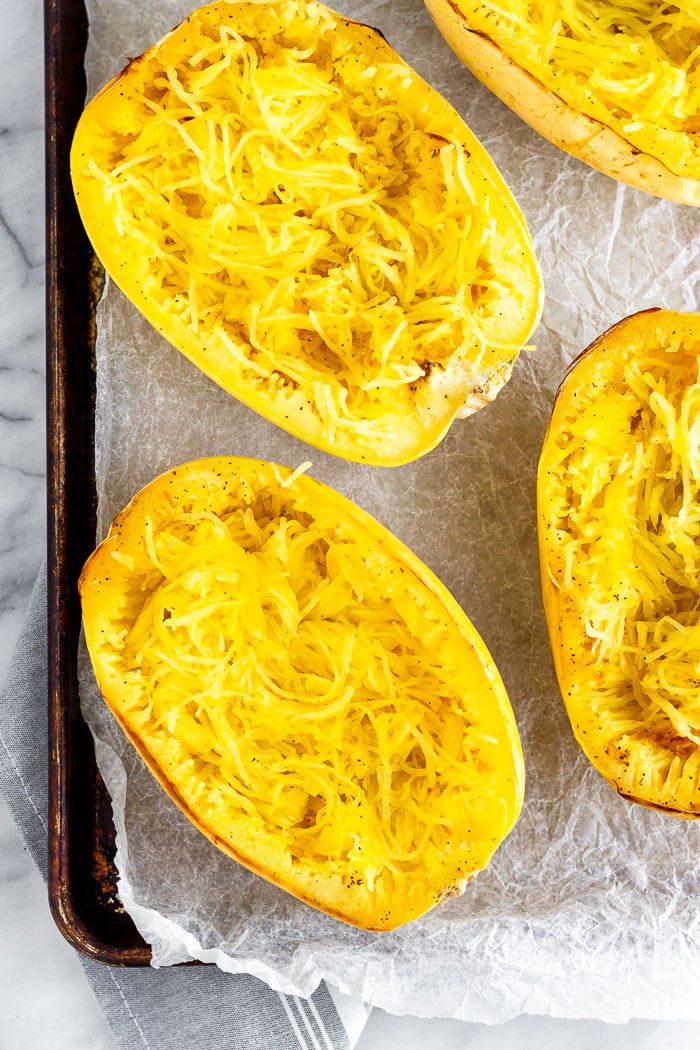 They will keep in an airtight container (these are my favorite meal prep containers) for about 5 days. Then it’s time to eat, heat up the squash and the meat and then top with your toppings! 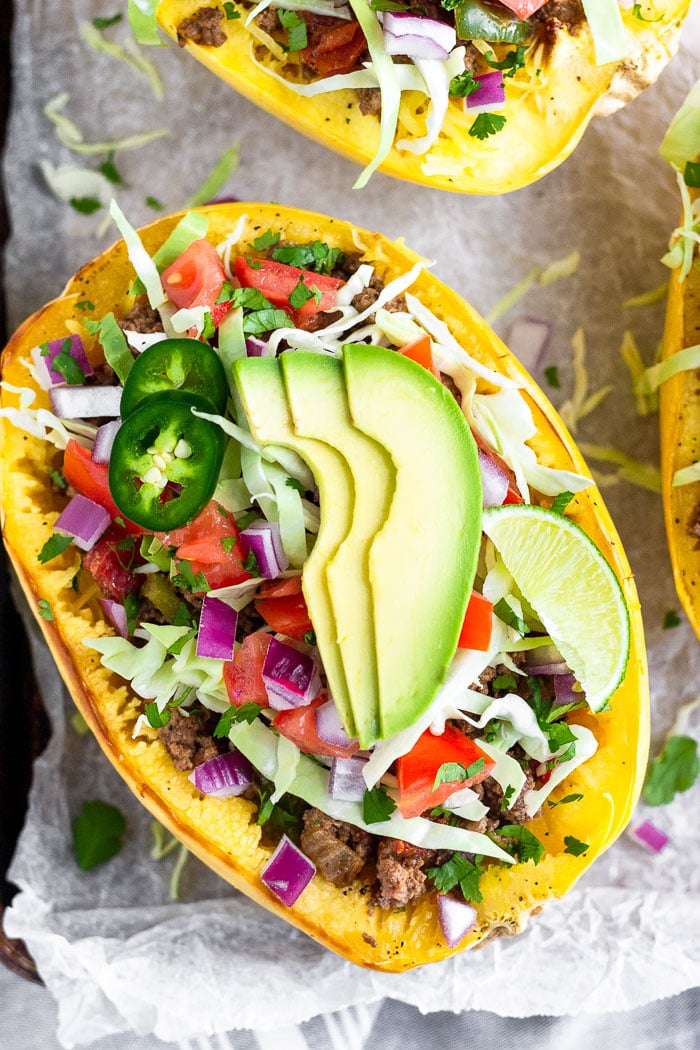 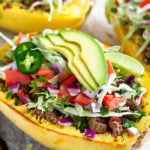 Nutrition Facts
Taco Spaghetti Squash Boats
Amount Per Serving (1 boat)
Calories 467 Calories from Fat 234
% Daily Value*
Fat 26g40%
Saturated Fat 8g50%
Polyunsaturated Fat 1g
Monounsaturated Fat 4g
Potassium 1377mg39%
Carbohydrates 46g15%
Fiber 13g54%
Sugar 18g20%
Protein 25g50%
Vitamin A 1850IU37%
Vitamin C 80mg97%
Calcium 140mg14%
Iron 4.9mg27%
* Percent Daily Values are based on a 2000 calorie diet.
Tried this recipe?If you make this recipe or anything from Eat the Gains, leave a comment and rating to let people know how you liked it! Also, make sure to post it and tag me so I can see all of your creations!! @eatthegains and #eatthegains on Instagram!

This recipe was previously posted and was updated this year!

This post may contains affiliate links and I may make little bit of money if you click on and purchase the products that are linked. It doesn’t cost you any extra money. The compensation helps with expenses to keep ETG up and running. I truly appreciate your support!

Hey there! Welcome to Eat the Gains™! I'm Kelly - Nutritional Therapy Practitioner, coach, and lover of food and fitness. I like to create healthy recipes that make my body feel good inside and out and fuel my active lifestyle. Here you'll find lots of easy & tasty whole food recipes, workouts, and a little indulgence, because who doesn't love a spicy margarita! Find out more about Kelly…

Bought all the winter squashes at the store today

Heading back home to Austin. I'm not sure who is g

Meal round up! Some of the real-life meals (no rec

Had the best time in Scottsdale celebrating Emily

Popcorn chicken!! I don't know about you, but I am