5 ingredients and 30 minutes to make this Creamy Cauliflower Golden Milk Soup, a light and satisfying nutritional meal that is vegan, paleo, and Whole30 approved! 80 degrees yesterday and I’m posting a soup recipe. I’m in no way complaining about the weather, but this recipe isn’t the best timing for us in Austin. Banking that it is cold in other parts of the world so you all can enjoy this delicious golden milk soup! If you haven’t heard of golden milk, you need to try it! It is a spiced milk featuring the nutritional powerhouse turmeric. Turmeric contains compounds called curcuminoids, which are responsible for it’s medicinal effects. The most important one is curcumin. Some of it’s benefits include anti-inflammatory properties (can help alleviate arthritis), anti tumor effect (think cancer), a positive effect on cholesterol, and powerful antioxidant properties. Depending on where you get your golden milk from, or how you make it, it sometimes contains crushed peppercorn, cinnamon, ginger, cardamom, cayenne, coconut oil, vanilla, and occasionally some kind of sweetener (honey, maple syrup, or dates). The pepper is the most important and helps with the absorption of curcumin, making the benefits of turmeric more available to the body. So you get the point, it’s really good for you. I stumbled upon Dulcis Milks and tried their golden child flavor and fell in love. Not only is all the milk organic, non-gmo, free of preservatives, and uses soaked almonds, it is a local company right here in Austin! I wanted to change it up from the typical golden milk so I blended it with cauliflower to make a creamy soup. This soup comes together in 30 minutes and is vegan, paleo, and Whole30 approved! We ate it as is, but it would go great with some protein on the side or some crunchy chickpeas on top. 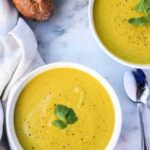 *If you don't live in Austin and don't have access to Dulcis Milks, you can sub another golden milk (either store bought or homemade).

Thanks so much Dulcis Milks for sending me some product and helping make this post possible!

Have you ever had golden milk?
Do you add turmeric to your diet?

If you make this recipe or anything from Eat the Gains, make sure to post it and tag me so I can see all of your creations!!

Hey there! I'm Kelly - nutrition coach, meal prep expert, and lover of food and fitness. I like to create healthy recipes that make my body feel good inside and out and fuel my active lifestyle. Here you'll find lots of easy & tasty whole food recipes, workouts, and a little indulgence, because who doesn't love a spicy margarita! Find out more about Kelly…