An easy no bake snack bar, these Peanut Butter Apple Bars come together in less than 15 minutes and are free of gluten, grains, and added sweetener! Move over pumpkin, apples are here! We all know people go bat sh*t crazy for pumpkin everything once September hits. It’s like we completely forget about summer and all we want is fall, pumpkin, sweaters, and boots. Fall is nice for all those things, but I love summer and it will always be my favorite. And lets not forget that after fall is winter. One of the reasons I moved away from the Northeast is because of the winters. Nobody wants to deal with that freezing cold nonsense. I don’t want to get too ahead of myself though. The main point of that little rant is that people completely forget about the other produce that comes into season with fall. Like apples! Since they are available all year round, I don’t think anyone really notices or cares, but you can see (they are huge!!) and taste the difference. One thing I do miss about the Northeast is going apple picking. Pretty sure there are no apple farms around Austin, at least not any that I had heard of. If you know of any though, let me know! Apple picking holds a special place in my heart. We would go occasionally when I was younger and Michael and I have gone as well. We all know the best part about going to the apple farms is getting the apple cider donuts though. The best. If you have never had one, find an apple farm and go get some fresh donuts! These bars combine two classic ingredients, apple and peanut butter. The bottom layer is composed of dates, nuts, and coconut oil. You then layer it with peanut butter (crunchy is my fav!) and then top that with sautéed apples and cinnamon. That’s it! Seven ingredients make these peanut butter apple bars that are perfect for snacking, pre-workout, or an after dinner treat. Even the kiddos would be down for these! 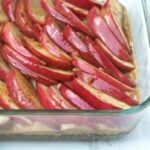 Nutrition Facts
No Bake Peanut Butter Apple Bars
Amount Per Serving (0 g)
Calories 0
% Daily Value*
Fat 0g0%
Saturated Fat 0g0%
Trans Fat 0g
Polyunsaturated Fat 0g
Monounsaturated Fat 0g
Cholesterol 0mg0%
Sodium 0mg0%
Potassium 0mg0%
Carbohydrates 0g0%
Fiber 0g0%
Sugar 0g0%
Protein 0g0%
Vitamin A 0IU0%
Vitamin C 0mg0%
Calcium 0mg0%
Iron 0mg0%
* Percent Daily Values are based on a 2000 calorie diet.
Tried this recipe?If you make this recipe or anything from Eat the Gains, leave a comment and rating to let people know how you liked it! Also, make sure to post it and tag me so I can see all of your creations!! @eatthegains and #eatthegains on Instagram!

What are some of your favorite things about fall?

Hey there! I'm Kelly - nutrition coach, meal prep expert, and lover of food and fitness. I like to create healthy recipes that make my body feel good inside and out and fuel my active lifestyle. Here you'll find lots of easy & tasty whole food recipes, workouts, and a little indulgence, because who doesn't love a spicy margarita! Find out more about Kelly…