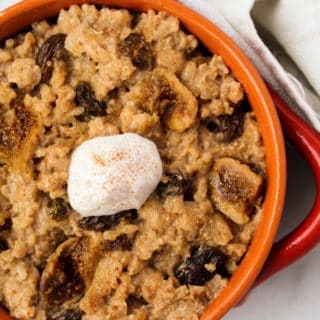 I honestly didn’t even know what it was until the summer after I graduated high school. I remember my boyfriend at the time had to get his wisdom teeth out. He had those snack packs that you used to get in elementary schools, but with rice pudding instead of the normal chocolate that I was used to seeing. My idea of it was literally exactly what it sounds like…rice in vanilla pudding. Honestly I thought the rice was uncooked in it, so it really didn’t appeal to me at all. And yes, sometimes my common sense is a little lacking…why would you eat uncooked rice Kelly? Long story short, rice pudding never caught my attention and I never tried it. That is until I made this recipe. I couldn’t stop eating this. Straight out of the fridge eating it it was so good. But if you know me, that really shouldn’t surprise you.

I discovered Dulcis Milk late last year and have met with Sarah (the owner) a few times. Not only are the almond milks amazing, but she truly cares about the Austin community and the product she is putting out in the world. She gave me some samples to try and a few recipe ideas I could test out, one of them being rice pudding. Being clueless on the rice pudding front, I did some googling to figure out how I was going to make it. Turns out rice pudding is usually loaded with lots of sugar. Instead of using sugar, this healthy rice pudding is sweetened with just dried fruit. The fruit absorbs some of the horchata milk and cinnamon and it makes it nice and juicy. If you don’t live in Austin and have access to Dulcis Milk, you can use whatever flavored almond milk you like. I would suggest unsweetened vanilla. If you are skeptical of rice pudding, I highly suggest you give it a try. You won’t be disappointed! If you make this recipe or anything from Eat the Gains, make sure to post it and tag me so I can see all of your creations!! 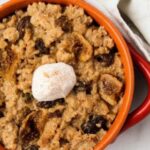 *if you don't live in Austin and have access to Dulcis Milks, you can use unsweetened vanilla almond milk, or your milk of preference.
Tried this recipe?If you make this recipe or anything from Eat the Gains, leave a comment and rating to let people know how you liked it! Also, make sure to post it and tag me so I can see all of your creations!! @eatthegains and #eatthegains on Instagram!

Thanks so much Dulcis Milks for providing me with some product and helping make this post possible!

Have you ever had rice pudding?
Is it something you like or you pass on?